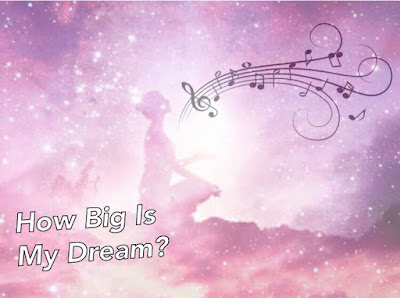 Do we decide whether to pursue something based on how big or how small it is to us?  If it’s big and requires a lot of time and effort will we talk ourselves out of. If it’s small will we abandon it thinking it’s not worth pursuing?  Why bother if it’s not going to mean that much in the long run.
We can come up with more excuses that, pardon the phrase, Carters has liver pills.  But there is no big or small. It’s all important. However, we can run and hide and tell ourselves and everyone else who will listen that we aren’t going to pursue something because it’s not meant to be, we don’t really want it that much or someone else already did it, is doing it or will be pretty soon.  And that’s partially true. If we wait long enough someone else will be doing it, perhaps not in the same way as we would but some form it of will still get done.
When we cheat ourselves out of living our dreams we also cheat the world because no matter what it is we were going to do, no one else can do it the way we would have.  No one will sing a song and reach an audience in the same way, no one will design a building exactly as we would have, no one else can interact with others the way we could, the music will not be written, the business will not be started, the healer will not reach out.  The list is endless. If we’re not doing it then it doesn’t get done. Simple as that. if we don’t do what our hearts tug at us to do then it’s lost and will not get done – ever.
The questions is can we find the inner strength residing within to provide the impetus we need that says “no matter, I accept and embrace this as mine to do.”  It is no small feat to say yes to things but it is no small feat to say no either. Things tug at us because they are calling to be fulfilled and we are the catalyst that is being used for that purpose.  We are “the chosen ones.”
Marian
Quote:  No moving picture of life is made up of only one player or one event.  My part on the stage is important, for without me the cosmic drama would be incomplete.  (Paramahansa Yogananda)
Posted by Marian E. at 8:16 AM