Starting Over Or Continuing What We Started? 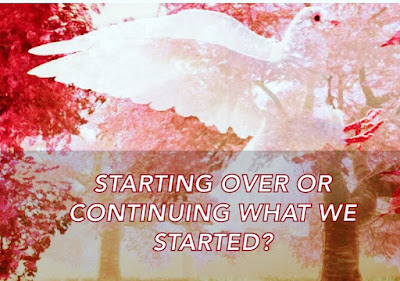 How many times have we told ourselves that we’re starting over?  And how many times have we made this declaration and got to work only to discover that what we’re starting over with looks very much like what we left behind.  Or thought we left behind? Could it be we keep doing similar things because we’re not supposed to stop doing what we started because of frustration, discouragement and perceived closed doors?  Is it possible all this starting over is just going to lead us back to where we were?


I’m starting a new blog with this first postings knowing full well it’s a continuation of what I was doing earlier but stopped because unseen forces entered my life and caused an interruption.  But interruption is not the same as full stop. Interruption means we learn to do the same thing a different way. Or perhaps with different people. Or in different places. I was full steam ahead with my former blog when the bottom dropped and as I sat staring at a screen of written words wondering how I was going to get them posted, a good friend comes along and informs me that she’s going to teach me how to do this myself (yes, I am not that computer savvy but am getting better, hence the saying you’re never too old to learn).


But then, what about those things we purposely shove out of our lives only to have them resurrect, seemingly out of the blue, because that original desire was lurking below the surface waiting for the right time to poke us.  This happened to me when I landed on the sidewalks of NYC wanting to be involved in the performing arts world of music. A few years after making some menial attempts of making this work, I abandoned it all for a life of survival.  I worked in an office, I married, had a child, divorced 27 years later only to then have that old music and writing urge pop back up. That was 40 years later. It was like it never left but this time it came back in a different form but it was still music and it was still writing.  How does that happen? Basically it happens because when you have a dream it never goes away no matter what happens in the ensuing years. It’s gonna come back and look you straight in the face and say “I’m baaaaaaack. Of course, I never really left. You just pretended I did.”


And so life goes on.  We stop doing things, then we start doing them again realizing the obvious - that it is the same stuff.  Are we amazed it works this way? Probably. Should we be? No. It’s how just the Universe, who knows our true desires, works in our lives.


So, today and in this place, I begin again a new blog because it’s want I want to do.  I love writing whether it’s blogs, songs, affirmations, books, plays, emails, notes, letters.  It is all the same to me. I realized during that lull how much I missed writing and it only took some people nudging me forward again and extending a helping hand.  They were my answer and that, too, is how the Universe works. Then sometimes the Universe sends us a surprise fixing that bottom and we can pick up where we left off.  In this case, I haven’t had to learn the steps I didn’t know before which allows me the time to still write while learning.


In closing, it might seem that this was about letting you know I am going to be writing again.  But it was also a message to you to inform you that tossing your dreams aside and acting as if they mean nothing to you because things became difficult is not going to be an excuse you’re going to be allowed to use.  Hey, if I can fess up to my meanderings, you can too and when you’re finished arguing with yourself and convincing yourself that I’m wrong, you can finally get back to what is calling your name. You’ll recognize it when it comes.  It’s the same one you heard before but this time it just might be louder. Yeah, the Universe works that way too.